Postgraffiti, geometría y abstracción included works by artists MOMO, Eltono, Marlon de Azambuja and Sam Bassett. It was curated by Javier Abarca at the central building of the Fundación Caixa Galicia, in A Coruña.

In Postgraffiti, geometría y abstracción the exhibition space was used as an archive of photographs and videos of pieces the artists had produced in the street following their usual methodologies. As a main feature I commissioned Eltono to produce a hybrid project between the street and the exhibition space, following the line of work he had started to explore the previous year with the project Pubblico.

The exhibition was a part of MUAU festival, for which the curator also directed a series of documentary screenings. 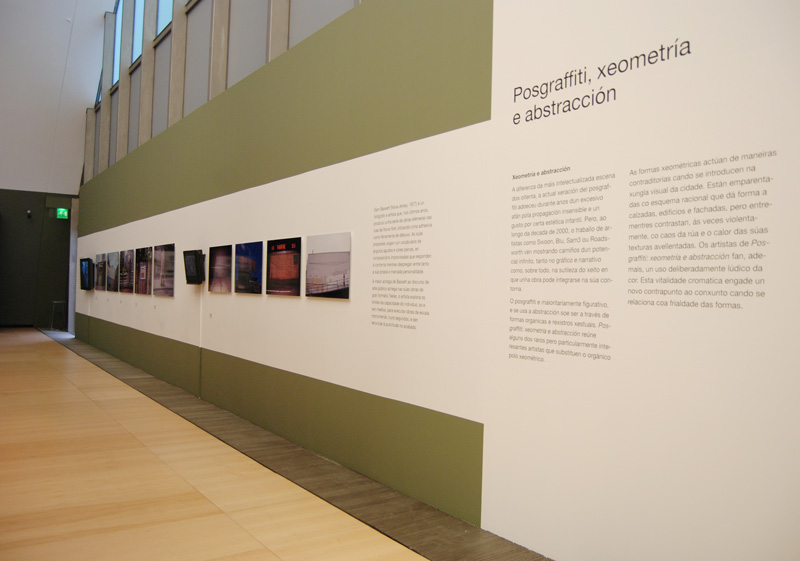 For A Coruña, Eltono created the project Branco de España. He selected several vacant shopfronts in a narrow and neglected street in the city centre, and installed transparent methacrylate plates coated in whitewash over their windows. During five days passers-by scratched and gradually removed the white layer, revealing the artist’s patterns hidden under it. The artist decided the moment when the process was finished, uninstalled the plates and took them to the exhibition space.

See the artist’s website for a complete and detailed documentation of the project. 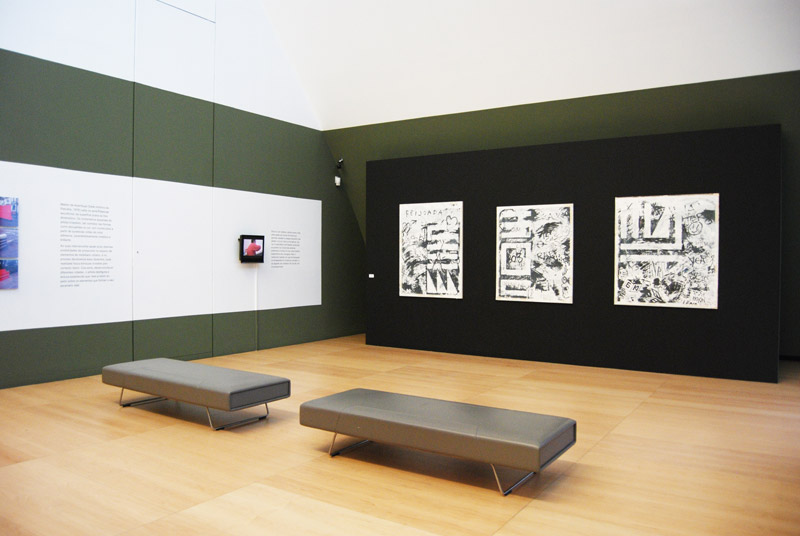 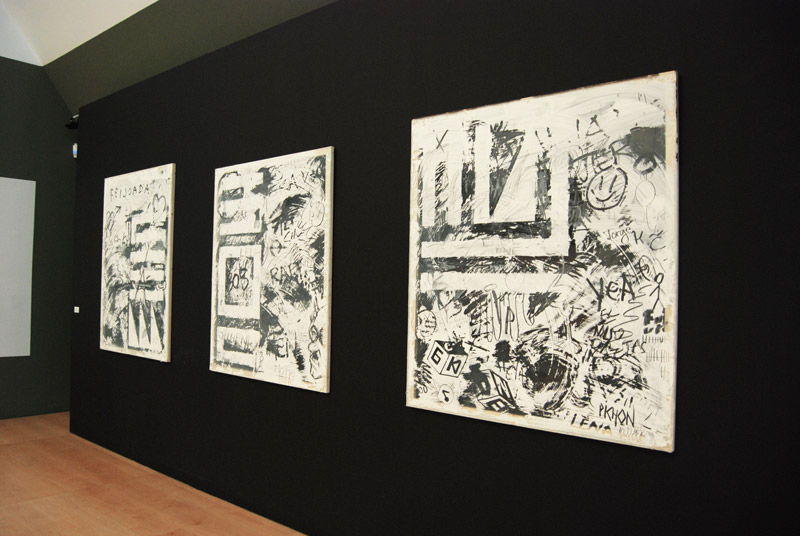 This video by M. A. Barrigüete documents the whole process, and was shown together with the whitewashed plates:

This excerpt from the curatorial essay for the later exhibition Deambular (2012) offers an explanation of the meaning of this kind of experiment:

Eltono has used his stints in art spaces to test formulas that play with the essential differences that separate the street and the exhibition space as workspaces for art.

One of those differences has to do with the life of the pieces. While indoor pieces are preserved so their form is always the one the artist gave them, the opposite happens with a street piece: once the artist abandons it to its fate, it starts to develop a life of its own. Its shape changes in a more or less gradual process, until it eventually disappears, through a sum of more or less accidental factors over which the artist has no control whatsoever. This process is lived by the viewer as part of his own experience, and is among the core values to be found in this kind of artwork. Its absence is one of the keys to understanding the ineffectuality of street images when they are simply transferred to a canvas.

This has been a basic concern for Eltono, as well as his main source of inspiration, when conceiving projects for art spaces. It forms the base of Chinchetas, as well as of Pubblico (2009) or Branco de España (2010), two of his best projects. All these series are games that let the artist exploit the mentioned form-generating factors in a controlled way, with two goals: on one hand, to observe mutations of his graphic vocabulary he would never have conceived, on the other – more significant for the present discussion – to generate indoor pieces that somehow encapsulate part of the organic force of the street.

In addition to Branco de España, Eltono showed photographs of his Furtive paintings and a video showing the production process of one of them. The video of his intervention Politonos (2004-2005) was also installed. 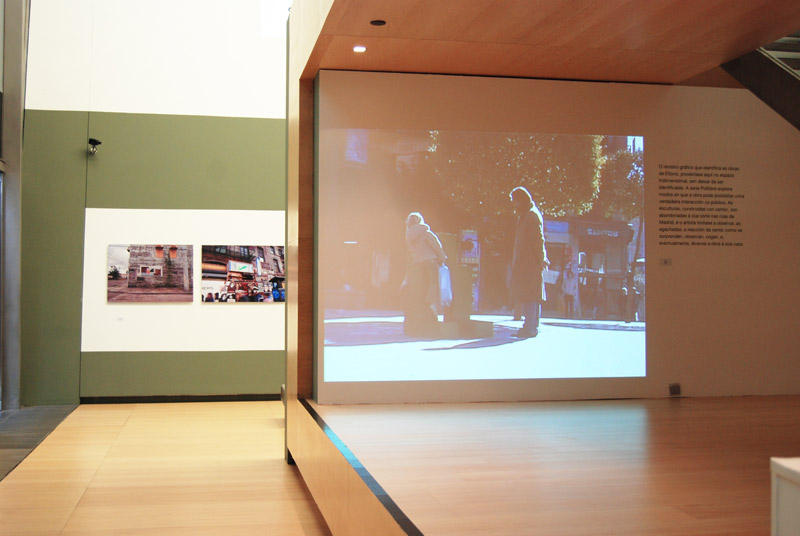 MOMO took part in the exhibition with photographs of two of his series: The MOMO Maker (2007-2009) and 100 Street Collages (2004-2008). Two videos which make part of this series were produced by the artist specifically for the exhibition: New Collage in New Orleans and Wheatpaste Bicycle Demo Vid. The online application The MOMO Maker was screened live high on a wall in the room. 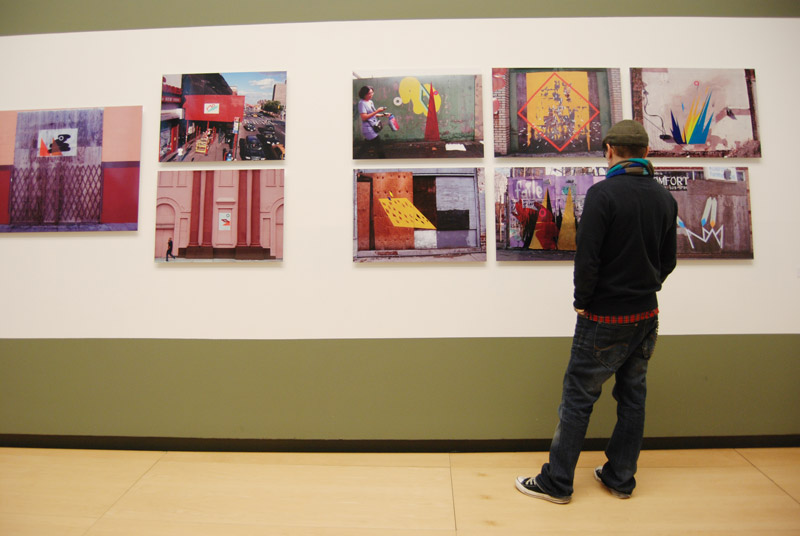 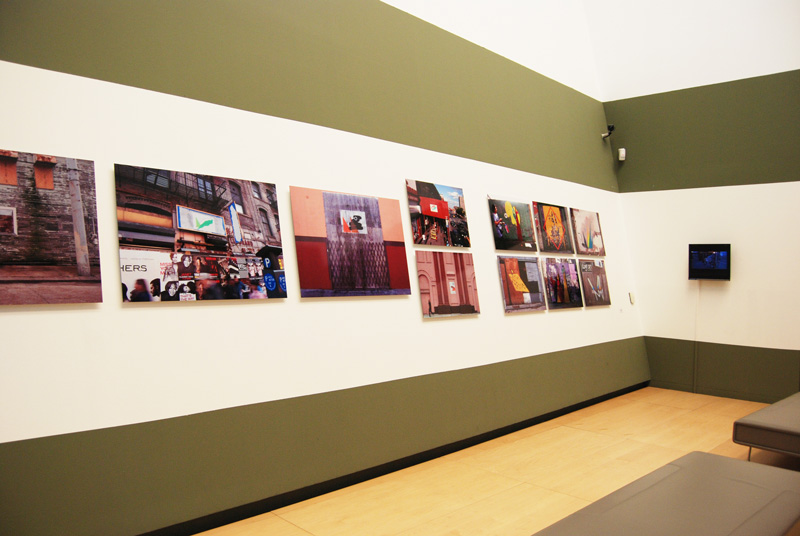 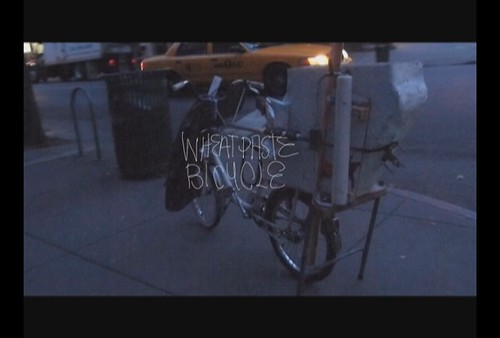 The show included images of street pieces by Sam Bassett and from the series Potencial escultórico by Marlon de Azambuja. 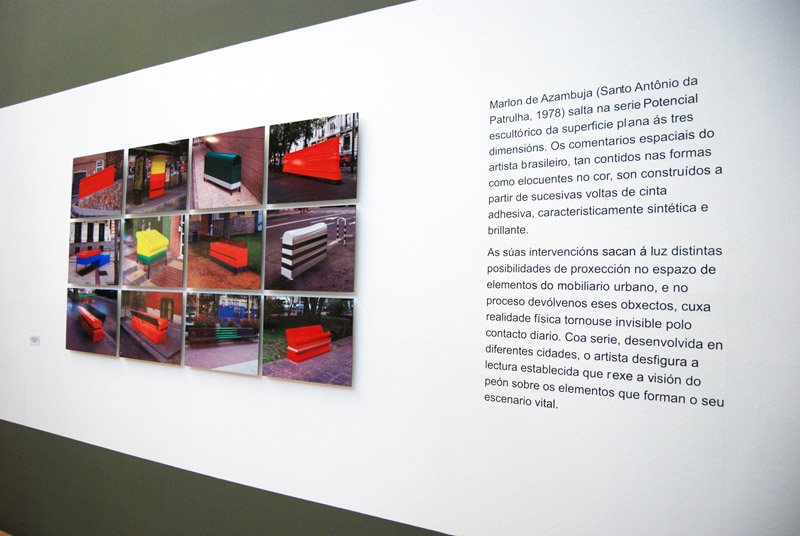 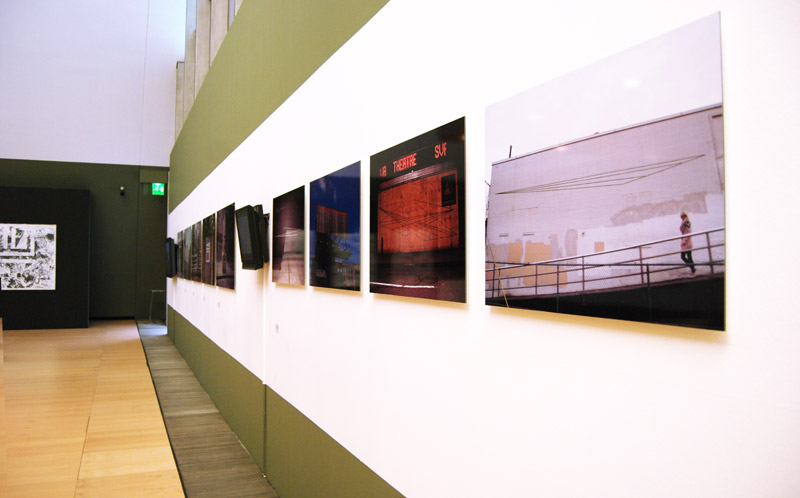 The exhibition was well attended and enjoyed a good measure of media attention. Critical reception was also good. An article in A*Desk included the following description of the show:

[…] a modest but exemplary model of how urban artistic practices, linked to their physical and social setting, can be translated inside an exhibition space. Or, in other words, about how contextual forms of art such as (post)graffiti can be musealized.

Spanish public television published a report on MUAU festival and on the exhibition.